The women’s fragrances from the Trade Routes series by Penhaligon's were inspired by the elegance and preciousness of the goods, which were sold in the London docks at the beginning of the 19th century. In those days, it was exceptionally lively. Anything exotic and valuable was handled there. The quays encountered rare treasures from all corners of the world. The Trade Routes line included the women’s fragrances Empressa, Lothair and Levantium. Empressa, a feminine perfume composition surrounded by royal noblesse, bewitches with fragrant ingredients from all over the world such as blood orange, mandarin, cardamom, vanilla, sandalwood and black pepper. Lothair, a homage to the eponymous sailboat, which was built in the Lavender Dock in 1870, unites delicious aromas such as juniper berry, grapefruit, lavender, magnolia, ambergris, cedar and wenge wood. Levantium symbolises the Orient, from which many of the precious goods originate. This perfume bewitches with notes of absinthe, rum, rose, saffron, ylang-ylang, jasmine, cardamom, clove and oud.

Perfume in a timeless tradition

William Henry Penhaligon, a barber from Cornwall, founded the London perfume house of the same name towards the end of the 1860s. His clientele included many bright personalities, especially the noblesse. The foundation for the perfume creations by Penhaligon's were laid by their first fragrance ""Hammam Bouquet"", the idea from which came from a visit to the neighbouring Turkish baths. The perfumes, which are considered to be classics today, as well as bath lines, candles and room fragrances by Penhaligon's, which enthuse numerous fragrance lovers. The reason for this is particularly the harmony of timeless beauty and tradition, which are radiated by the women’s fragrances of the Trade Routes series. 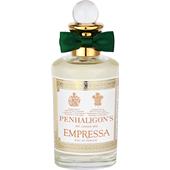