Women’s fragrances such as Apres L'Ondee are exclusive classics

Guerlain was founded in 1828 and is, with good reason, one of the oldest perfume manufacturers in the world. Throughout its changeable but always successful history, the house of Guerlain was run as a family company until 1994. It now belongs to the LVMH Group, but the men’s and women’s fragrances, which are still sold in exquisite flacons, even today, are still produced using the old original recipes. For example, Apres L’Ondee was initially launched in 1906, and continues to enchant women today. In the top notes, the perfume charms with aniseed, bergamot, neroli, lemon, and cassia. The middle notes are opulent with carnations, iris root, mimosa, roses, violets, vetiver, jasmine, ylang ylang, and hawthorn. The base of vanilla, styrax, musk, iris, heliotrope, benzoin, and amber is also rich and long-lasting. Apres L’Ondee is one of those women’s fragrances that reflects all aspects of life and is simply perfect for all women who love life. In this perfume, Guerlain has created a real classic, which is not just valuable because of its selected ingredients. 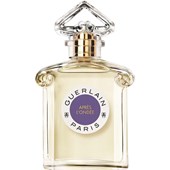 Zadig & Voltaire
This Is Him!
Scented Candle