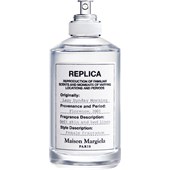 Before Serge Lutens developed his first Perfume Spray, he inspired plenty of other people and companies with his talents. During his hairdressers training in Lille, he unleashed his extraordinary style, that shapes his personal look and his creations. Soon he was working on this at Vogue, before being discovered by renowned fashion magazines and supporting Christian Dior. His progressive approach to make-up in the 1970s was revolutionary. For Shiseido, he developed not only a powerful identity but also his first fragrances creation. Other unisex fragrances followed that can be seen as classics of perfume history. His compositions have innovative, uncompromising properties which also characterise the Duft L´EAU SERGE LUTENS. The works of Serge Lutens, such as the Fragrance Foundation have been awarded many prizes.

One of the milestones in his career was the opening of the Salons du Palais Royal and the founding of his own brand. Thanks to his entrepreneurial independence, Serge Lutens can realise his wilful, occasionally rebellious ideas better than ever before. Since 2010, this has allowed the bearer of the title “Commandeur dans l’ordre des Arts et des Lettres” to deepen the connection between literature and perfume by creating fragrances. He himself described this new approach as anti-perfume, an example of which is L´EAU SERGE LUTENS. In fact, he captures in this composition an unusually puristic breeze through the arrangement of the scents. The refreshing Eau de Parfum Spray relies amongst other things on the white blossoms of mint to capture the breeze of a freshly washed and evenly ironed shirt. As bizarre as this aromatic theme sounds, that’s how striking this example of unisex fragrance is. If you have become curious about this work by the French icon, then it’s worth taking a look at other unisex fragrances and cosmetics from the brand.
Questions about the product?
Customer ratings